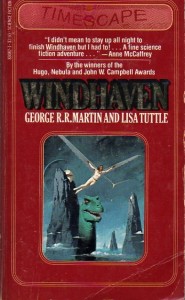 The Facebook challenge NeNoReMo, Neglected Novel Reading Month, an alternative to NaNoWriMo, made me pick up this book, that I bought some time in the eighties. Since then it has remained unread in the shelf, and was just as neglected as the challenge specified. Since one of the two authors, GRRM, is very much the rage nowadays with his epic fantasy series A Song of Ice and Fire, which I have yet to read, I found another reason to read Windhaven, as warming up.

I do believe, on fairly good grounds, that Lisa Tuttle wrote most parts of the book. The stile seems more Tuttle than anything else I’ve read by GRRM. However, the book i split in three parts, and a short prologue. Two out of three of the longer, novella length, parts were previously published in Analog Magazine. So as an extended fix-up, it holds up fairly well. The parts have been put together to a functioning structure.

The book hovers on the thin line between science fiction and fantasy. It could maybe be classified as ”science fantasy”, a term sometimes used when it’s unclear which genre a book belongs to. The fact that the depicted society is on a medieval level of development, and the book is provided with the fantasy-typical maps can be construed as an argument for calling it fantasy. But there is also an sf rationale. The people are descendants from the crew and passengers on a space ship that crash landed on the planet, which has low gravitation and a thick atmosphere. It’s also mainly covered by ocean, whit just a few scattered islands and no continents. From material from the space ship, probably from some kind of gigantic star sails, the first generations of the involuntary colonists craft wings that they can fly with on the forceful winds of the heavy atmosphere. Since the wings are a limited resource they are inherited in flyer families that forms their own aristocracy, wielding a monopoly on the oral communications between the islands.

The protagonist, Maris, is landborn, a daughter of a poor fisherman. Already as a child she dreams of becoming a flyer. It doesn’t come as a big surprise that she subsequently becomes adopted by one of the island’s flyers and learns how to handle the wings. Later, she is in the center of the the three crises the Windhaven society goes through during her lifetime. First when she seizes the right to become a flyer, for herself and other landborns. But since the wings are a finite resource they must be earned through challenges. In the second part the new-found rights for non flyer-born and in the last part she i she is involved in preventing a war that would threaten the whole Windhaven society.

There is good flow in the language, the conflicts are well construed, and both Maris and other characters in the book go through a personal development that makes them plausible. The authors does not use long info dumps to describe the society, the descriptive parts are well integrated in the storytelling.

There is one thing that bugs me a little with this book. The civilization is on a decent level. Metalwork are legio, ships are sailed and both beer, wine and produced. But the art of producing paper/papyrus/parchment or anything else to write on, seems like the art of writing itself to be unknown. One of the main structural elements in the book is that it is the flyers that deliver oral messages between the rulers of the islands. Messages that they memorize verbatim. In the end it is exactly the flyers credibility in this important task is questioned.

For me, the book’s credibility had been higher if they had been flying around with written messages instead. And, in a way that is hard to define, the book has an overall 80’ies feel. I can’t exactly say why, but I don’t think it could have been written, or published, today.